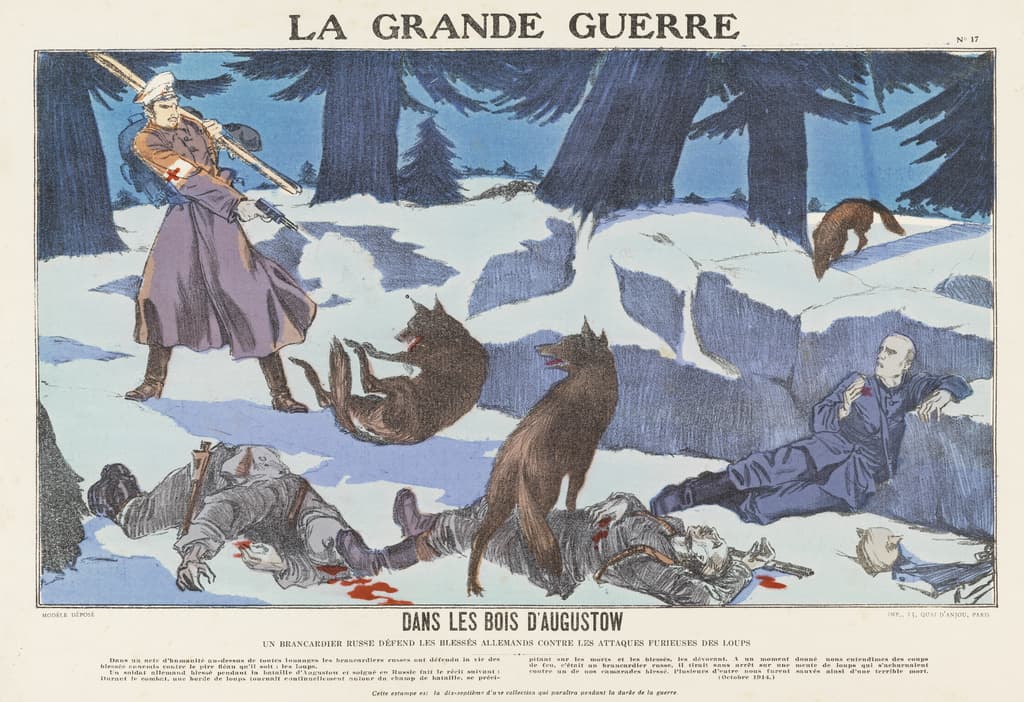 France and Russia were bound together in war. Russia was determined to react against Austrian aggression towards Serbia, and knew that Austria would not act without support from Germany, which put France at risk. France was well aware that if war came, Germany would strike at them first (the so-called Schlieffen plan) and so committed itself to support Russia.

In July the French president and prime minister were on a diplomatic mission to Russia and cut off from communication. The French general Joseph Joffre became frustrated by the political paralysis, and sent word to the Russian government that they could count on France’s support. He saw it as imperative that Russia act as quickly as possible, forcing Germany to fight on two fronts. Clashes took place between Russian and Austrian troops in Augustów forest, north-east Poland, in early October.

The print documents an ‘act of humanity’ of a Russian medic, who shot wolves preying on wounded German soldiers. The caption condemns the enemy for leaving its wounded for dead (a recurring comment, see no. 21 ), but notice that the Germans are not demonically caricatured. This attempt at candid reporting is a notable feature of the print series.

In the woods of Augustow. A Russian medic defends wounded German soldiers against furious wolf attacks
In an act of humanity above all praise Russian stretcher bearers have defended the lives of wounded enemy soldiers from the worst evil there is: wolves. A German soldier wounded during the battle of Augustow and being nursed back to health in Russia related the following story: ‘During the combat a pack of wolves circled the battlefield continuously, dashing to the dead and wounded, devouring them. At one point we heard gunshots. It was a Russian medic. He fired constantly on a pack of wolves that was attacking one of our comrades. Many of us were thus saved from a terrible death’ (October 1914).