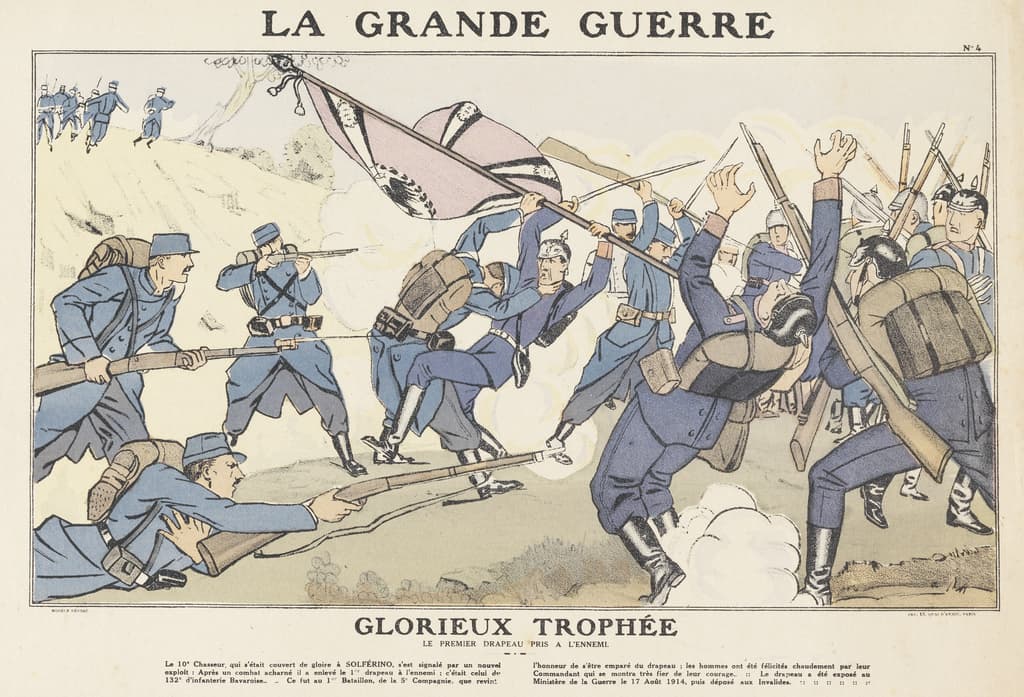 Unknown printmaker
Glorieux trophée…
A glorious trophy. The first flag taken from the enemy
Lithograph with hand colouring through stencils. Publisher: Tolmer & Co. August 1914.
Given by Sophie Gurney 1994 No. 4 from the series La Grande Guerre.
P.10-1994

Just as Germany had developed a plan for attacking France in the event of a war, General Joseph Joffre, Commander-in-Chief of the French army, had a plan for deploying the French army against Germany. Forts had been erected along the short frontier between the two countries. In 1914 Joffre ordered troops to attack the flank of the German army as it headed through Belgium. The attack on 14 August was a disaster for France, with troops advancing against German shells and machine guns. Some of the army’s most experienced troops suffered heavy casualties. However, at Saint Blaise la Roche the first battalion of chasseurs à pied (light infantrymen) captured artillery, 400 German prisoners and the flag of the 132nd Pomeranian Regiment.

The representation here has little basis in reality. In testimonial accounts the flag was discovered hidden in a hay stack after the close of battle. Here, the artist visualises a more dramatic scene to enhance the symbolic victory. The text below declares that the ‘trophy’ will be shown at the Ministry of War in Paris before being deposited at the Invalides

The French caption with English translation

A Glorious Trophy. The first flag taken from the enemy
The 10th Light Infantry [regiment], which received accolades at Solferino, is distinguished by a new feat. After a fierce battle it took the first flag from the enemy, that of the 132nd Bavarian infantry. It was the 1st Battalion of the 5th Company that had the honour of seizing the flag. The men were warmly congratulated by their commander, who was very proud of their courage. The flag was sent to the Ministry of War on 17 August 1914 and then deposited at the Invalides.