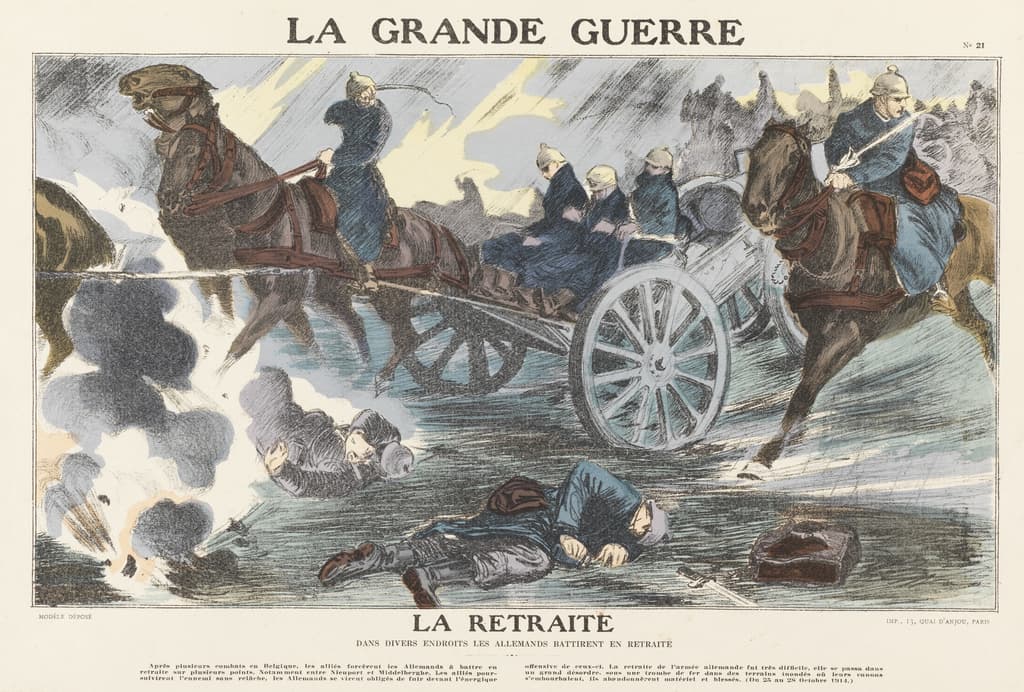 Unknown printmaker
Le Retraite …
The Retreat. The Germans have retreated in various locations
Lithograph with hand colouring through stencils. Publisher: Tolmer & Co. 1914
Given by Sophie Gurney 1994

No. 21 from the series La Grande Guerre .

The River Yser formed a natural obstacle to the German advance and the Belgians made strategic use of the surrounding land, which contained a network of drainage canals. Opening the Yser’s sluice gates caused serious flooding and damage, but it forced the German army to retreat and established the line of the Western Front. Belgium also sabotaged its railway network, disrupting the transportation of German supplies and reinforcements. These acts allowed the Belgians to retrain a small sliver of their own territory. Thwarted by the impossible conditions, German forces concentrated their efforts on Ypres, where fighting continued until November.

Both image and text celebrate the victory in the great disorder of retreating German soldiers. Lines and almost abstracted forms convey wind, speed and chaos. Dead or dying men lie in the path of a field gun’s wheel; horses’ ears are pressed back in fear. The text describes how the fleeing Germans abandoned submerged equipment and wounded soldiers. This ‘fact’ is repeated on no. 17 and no. 25 , and follows the lead of the French press, which implied the character of German soldiers was so inherently base they acted with cruelty even toward their own.

The Retreat. In various locations the Germans have retreated
After several battles in Belgium, the Allies forced the Germans to retreat on several points, especially between Nieuwpoort and Middleberghe. Allies pursue the enemy relentlessly; the Germans were seen to flee from this energetic offensive. The German army’s retreat was very difficult, they fell about in great disorder in a whirlwind of iron, in flooded areas where their canons were getting stuck, and they abandoned equipment and wounded men. (From 23 to 28 October 1914).