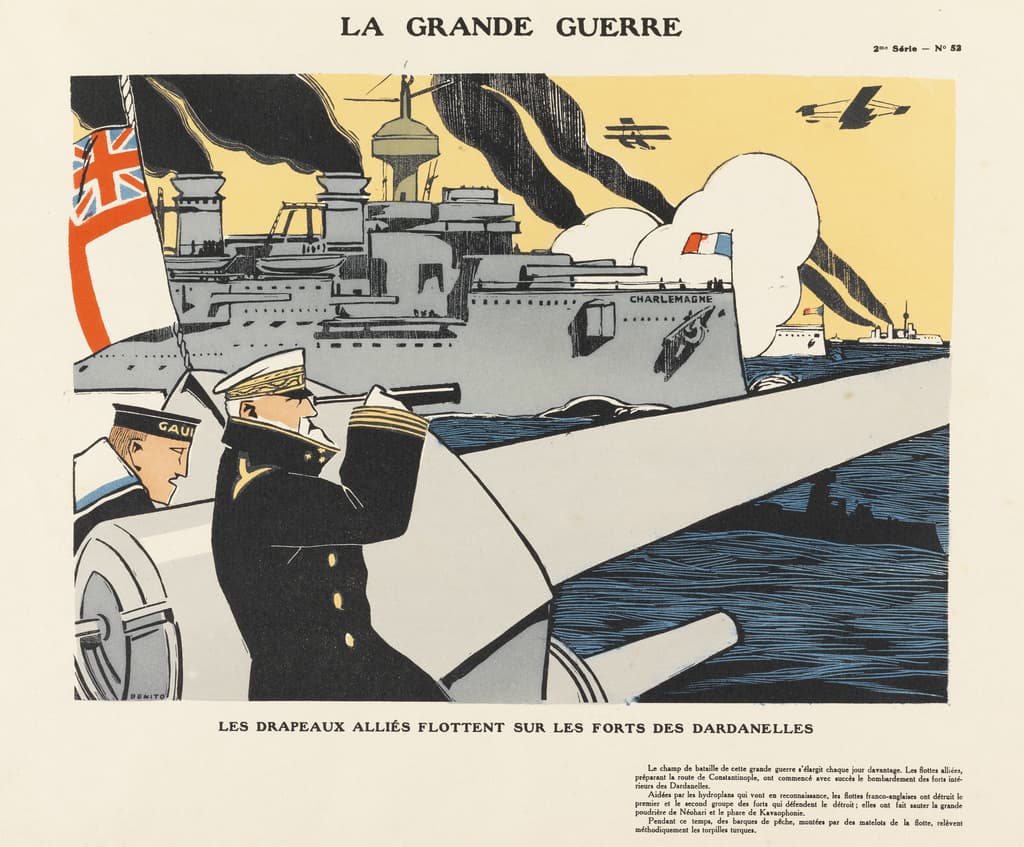 The Dardanelles or Gallipoli Campaign was launched by Britain and France against Turkey in an effort to occupy Constantinople. Britain was especially keen on this venture, and had been planning an offensive since 1907, but it had been postponed as potentially too dangerous. Winston Churchill, then Lord of the Admiralty, raised the idea in December 1914, as an easier way to defeat Germany. Securing the straits in the Dardanelles would give access to Allied shipping, and allow sorely needed supplies to reach Russia. The territory was heavily guarded with guns, mines and anti-submarine nets. A Franco-British fleet had bombarded the shore forts on 3 November 1914, but advantage was not taken and in the delay to make a move Turkey rebuilt the forts and sent in reinforcements. Allied landings were made on beaches, but troops were trapped there by Turkish defense, resulting in devastatingly high casualties. This print was issued just before German U-boats arrived in the area, blocking Allied supply lines.

This print and the one on the next page have a different feel to the rest of the series. Here this is due to the solid blocks of stencilled colour, and, in the other, the schematic black lines of the woodcut block.

Allied flags fly on the forts of the Dardanelles
The battlefield of the Great War widens every day. Allied fleets, preparing a route to Constantinople have successfully started the bombardment of the strong interiors of the Dardanelles. Assisted by hydroplanes on reconnaissance, the Anglo-French fleet destroyed the first and second group of forts defending the Strait. They blew up the gunpowder store of Neohari and the lighthouse Kavaphonie. Meanwhile, fishing boats manned by sailors of the fleet methodically removed Turkish torpedoes.