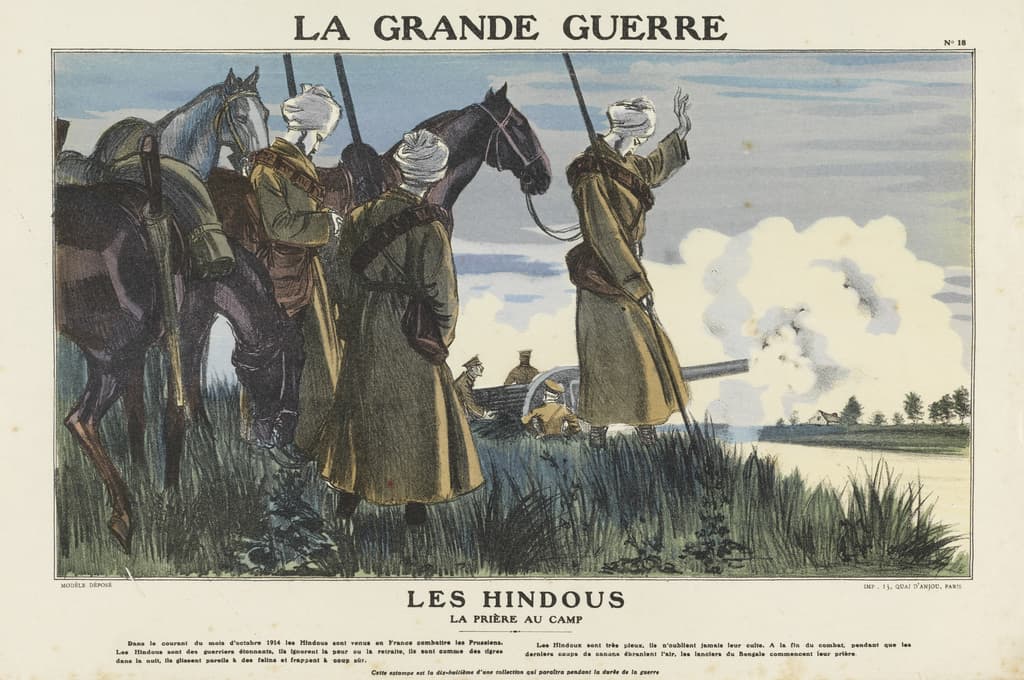 Somewhere in the region of 600,000 troops drawn from the furthest corners of Europe’s empires fought on European battlefields during the war. Britain, then the ruling colonial power, mobilized 1.5 million Indian soldiers (including from present-day Pakistan, Bangladesh, Burma and Sri Lanka). Indian soldiers were serving on the Western Front as early as September 1914. Two divisions - renamed Lahore and Meerut - arrived at Marseilles and were cheered by French crowds shouting Vivent les Hindous (‘Long live the Hindus’). The lack of sensitivity about cultural differences was typical for all the belligerent powers, a fact that did not go unnoticed by Indian soldiers. In letters home some men complained that soldiers of different religions were being buried in the same cemetery. In reality the Indian army was multi-ethnic, multi-lingual and multi-faith. Differences were often reflected in uniforms, especially in the headdress. With the lances and horses these men probably belong to a cavalry regiment.

France drew soldiers from Algeria, Morocco, Tunisia and ‘Indochina’ (Vietnam, Cambodia and Laos), and recruited over 200,000 labourers to work behind the lines, building infrastructure, working in munitions factories, and ‘cleaning up’ battlefields.

Hindus. Prayer at the Camp.

In the course of October 1914 Hindus came to France to fight the Prussians. Hindus are amazing warriors. They do not know fear or retirement; they are like tigers in the night; they glide like felines and strike a sure blow. Hindus are very pious, they never forget their worship. At the end of combat, during the last canons fire shakes the air, the Bengal lancers begin their prayer.