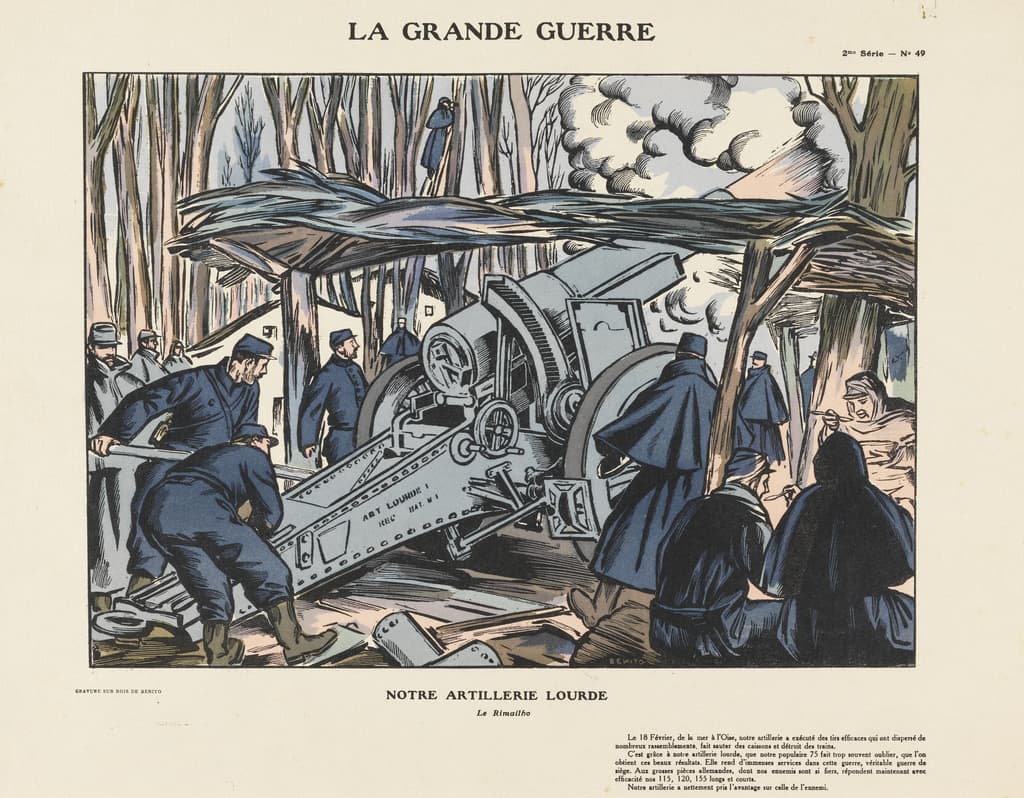 France had long anticipated a war with Germany and had made preparations, such as defenses along France’s eastern frontier and the 1913 Three-Year conscription act. In 1909 France had committed to expand its navy, but at the outbreak of war in 1914 only two out of the projected 14 Dreadnoughts were in use. In terms of air power France led the world with more aircraft than any other country (see no. 14). However, not as much investment had gone into the provision of heavy artillery for the army. In the summer of 1914 they had equipped themselves with their ‘superb 75s’ (75mm quick-firing field guns, mentioned in the caption, see below), but they were behind with the provision of howitzers and heavy artillery. This print celebrates a 155mm Rimailho Canon, a supposedly easily manoeuvrable gun with range of almost 6km.

As is widely acknowledged, loss of life was so great in the early battles of the war because great masses of men advanced in the traditional manner against enemy forces in control of devastatingly powerful modern weaponry. General Joseph Joffre was not alone in the belief that the enemy could be defeated if human courage was sufficiently strong.

Our heavy artillery
On 18 February, on the sea at Oise, our artillery executed efficient shots that have dispersed many groups. It is thanks to our heavy artillery, that our popular 75[mm rifles] too often forget, that these good results are achieved. It renders immense service to the war, real siege warfare. The big German guns, of which our enemies are so proud, now respond effectively to our 115, 120, 155 long and short. Our artillery has clearly taken advantage of those of the enemy.